Data presentation can be both beautiful, elegant and descriptive. There is a variety of conventional ways to visualize data tables, histograms, pie charts and bar graphs are being used every day, in every project and on every possible occasion. However, to convey a message to your readers effectively, sometimes you need more than just a simple pie chart of your results. In fact, there are much better, profound, creative and absolutely fascinating ways to visualize data. Many of them might become ubiquitous in the next few years.

So what can we expect? Which innovative ideas are already being used? And what are the most creative approaches to present data in ways we’ve never thought before?

Let’s take a look at the most interesting modern approaches to data visualization as well as related articles, resources and tools. 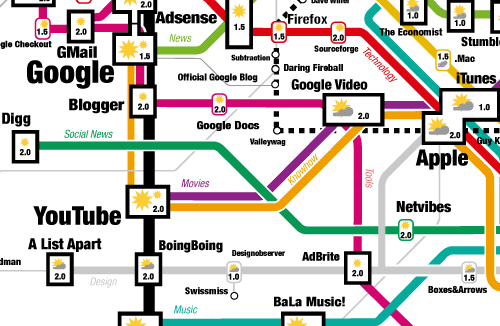 Informationarchitects.jp presents the 200 most successful websites on the web, ordered by category, proximity, success, popularity and perspective in a mindmap. Apparently, web-sites are connected as they’ve never been before. Quite comprehnsive.

Newsmap is an application that visually reflects the constantly changing landscape of the Google News news aggregator. The size of data blocks is defined by their popularity at the moment.

Voyage is an RSS-feader which displays the latest news in the “gravity area”. News can be zoomed in and out. The navigation is possible with a timeline. 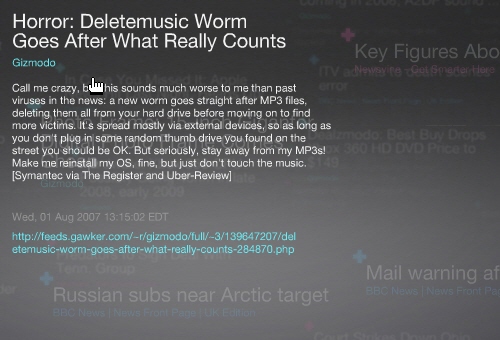 Digg Stack: Digg stories arrange themselves as stack as users digg them. The more diggs a story gets, the larger is the stack.

Amaztype, a typographic book search, collects the information from Amazon and presents it in the form of keyword you’ve provided. To get more information about a given book, simply click on it.

Similar idea is being used by Flickrtime. The tool uses Flickr API to present the uploaded images in real-time. The images form the clock which shows the current time.

Time Magazine uses visual hills (spikes) to emphasize the density of American population in its map. 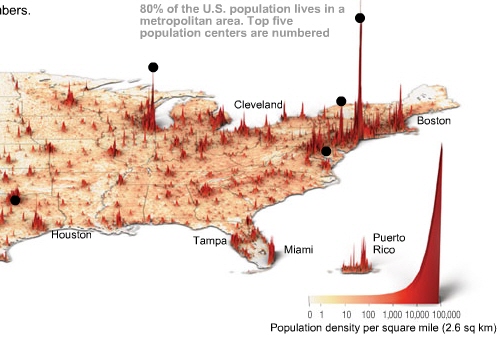 CrazyEgg lets you explore the behavior of your visitors with a heat map. More popular sections, which are clicked more often, are highlighted as “warm” – in red color. 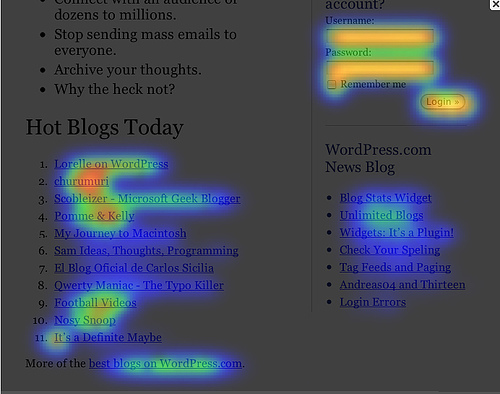 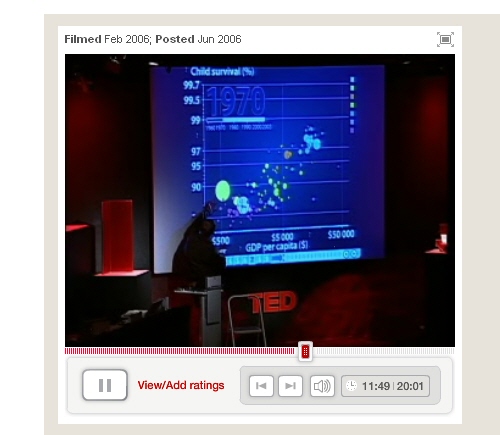 Three Views shows three views of the earth, in which each country is represented by a circle that shows the amount of money spent on the military (size of circle) and what fraction of the country’s earnings that uses (colour). Compact and beautiful presentation of data. 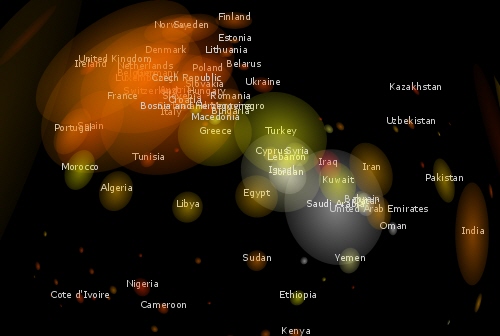 We Feel Fine shows human feelings, calculated from a large number of weblogs. 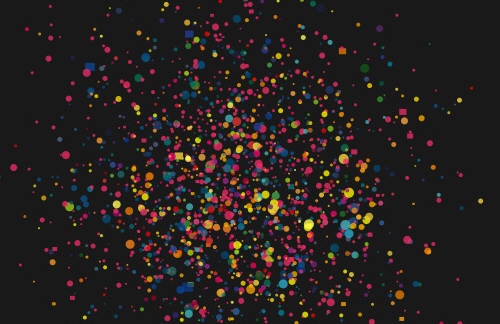 Visualizing the Power Struggle in Wikipedia displays the most popular articles and the most frequent search queries in the heatmap. 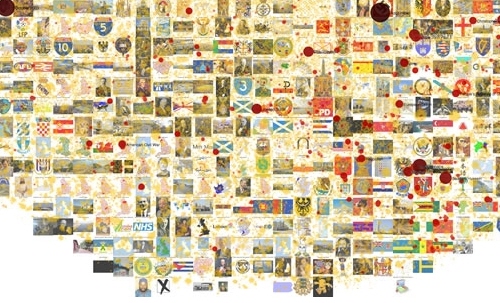 Visualizing the Power Struggle in Wikipedia 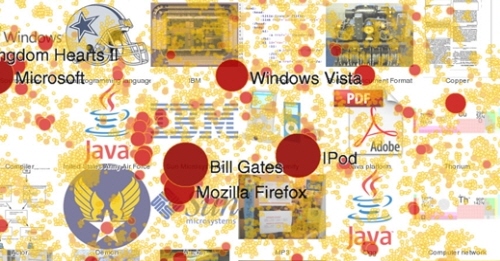 Visualizing the Power Struggle in Wikipedia

Interactive History Timeline presents the history of Great Britain, divided into interactive data blocks. The density of events is displayed on the map. 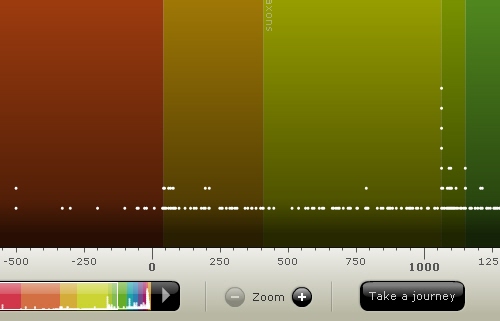 Winning Lotto Numbers is supposed to present the frequency of appearance of every number from one year to the next one. This graph is definitely not one of the most clear ones. 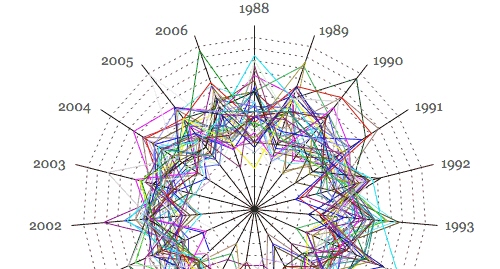 Elastic Lists demonstrates the “elastic list” principle for browsing multi-facetted structures. You can click any number of list entries to query the database for a combination of the selected attributes. The approach visualizes relative proportions (weights) ofmetadata by size and visuzalizes characteristicness of a metadata weight by brightness. Author’s blog regularly informs about new experiments in the area of data visualization. Nice to observe, useful to bookmark. 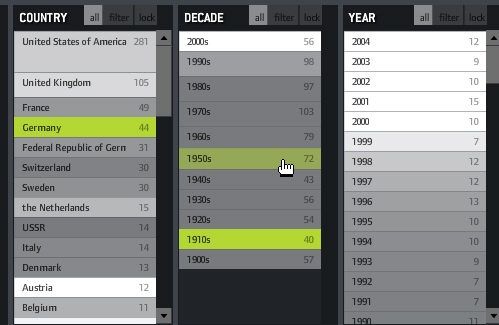 Munterbund showcases the results of research graphical visualization of text similarities in essays in a book. “The challenge is to find forms of graphical and/or typographical representation of the essays that are both appealing and informative. We have attempted create a system which automatically generates graphics according to predefined rules.” 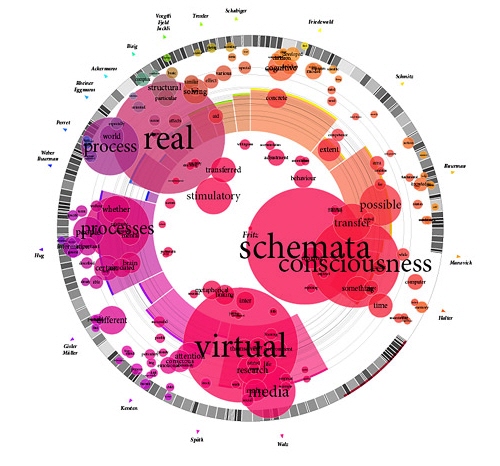 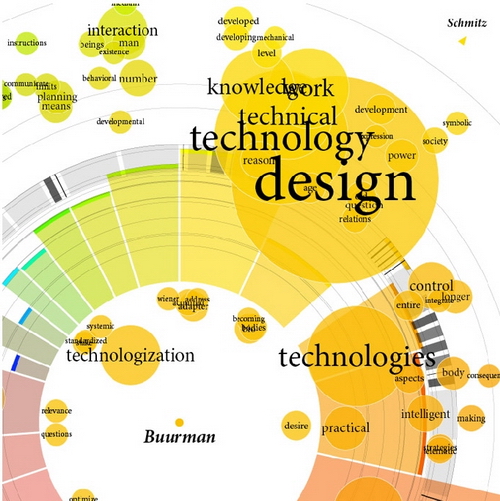 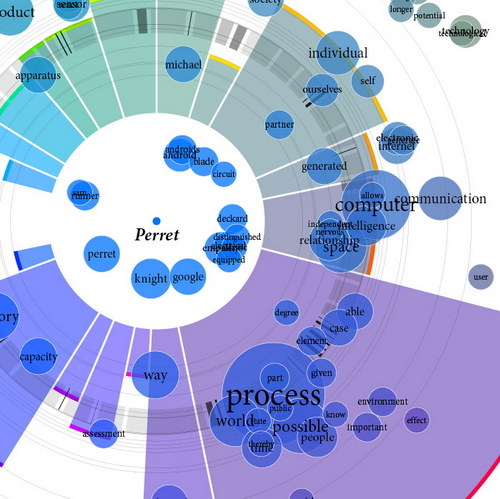 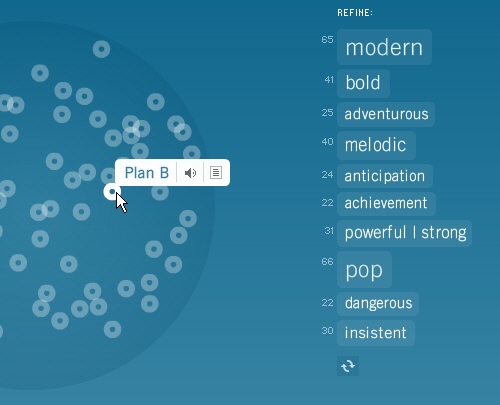 Universe DayLife displays events, connections and news as circles which gravitate around the topic they are related to. 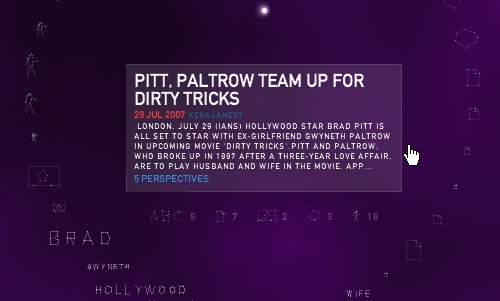 Musiclens gives music recommendations and presents your current mood and musical taste as a diagram.

Figd’t Visualizer allows you to play around with your network. You interface with the Visualizer through Flickr and LastFM tags, using any tag to create a Magnet. Once a Tag Magnet is created, members of the network will gravitate towards it if they have photos or music with that same Tag. Available for Mac OS X, Windows and Linux. Alpha-version. 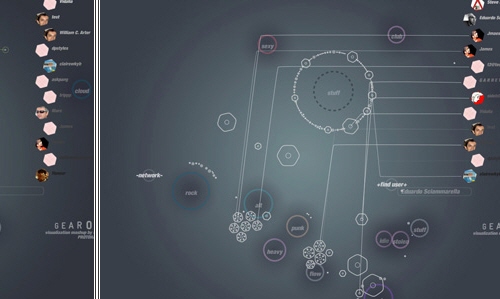 What have I been listening to?: Lee Byron describes his approach of creating a histogram about his music listening history. 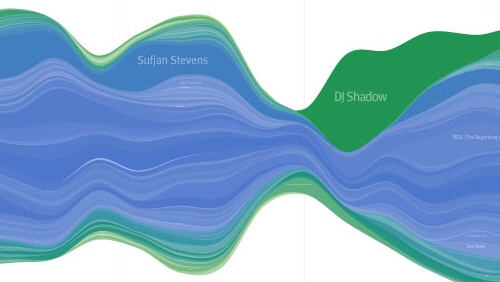 What have I been listening to

Shape Of Song: What does music look like? The Shape of Song is an attempt to answer this seemingly paradoxical question. The custom software in this work draws musical patterns in the form of translucent arches, allowing viewers to see – literally – the shape of any composition available on the Web. 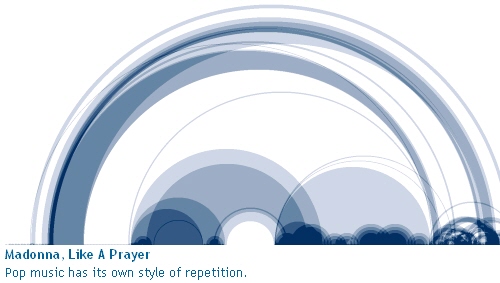 Musicmap: connections are represented as connected lines; they create a web. 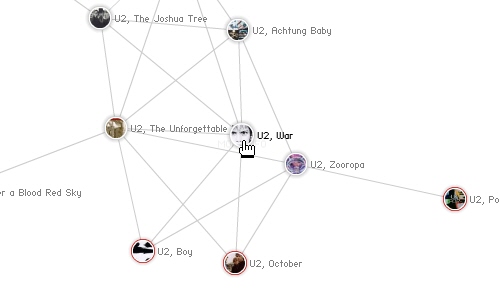 Musicovery displays music taste connections and lets you listen to the song and browse through similar songs. 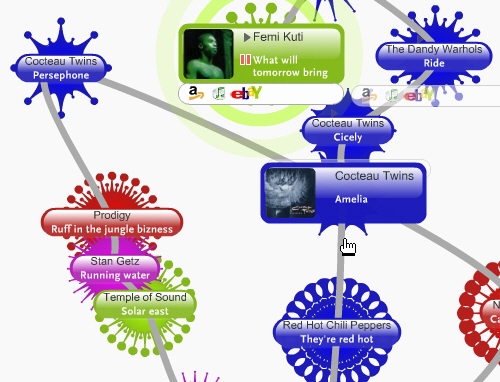 Lanuage Poster proves that even simple lines can be descriptive enough. The History of Programming Languages as an original timeline.

Spacetime offers Google, Yahoo, Flickr, eBay and images in 3D. The tool displays all of your search results in an easy to view elegant 3D arrangement. Company promises that the days of mining through pages and pages of tiny thumbnails in an effort to find the item you are looking for are over. 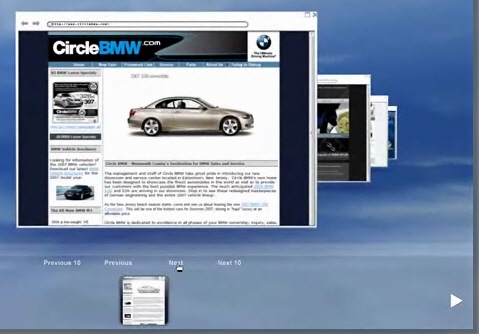 UBrowser is an open source test mule that renders interactive web pages onto geometry using OpenGL® and an embedded instance of Gecko, the Mozilla rendering. 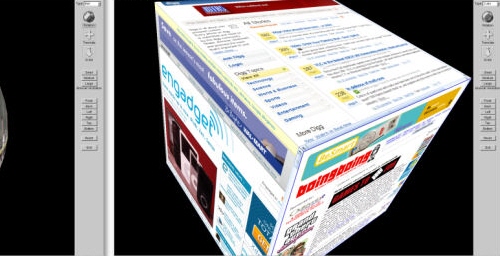 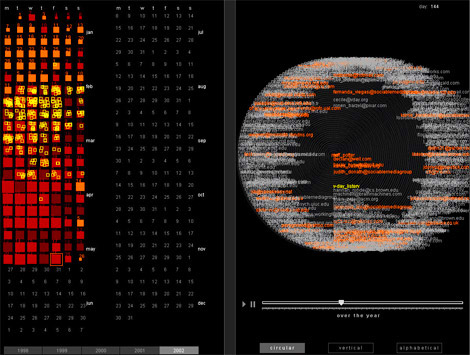 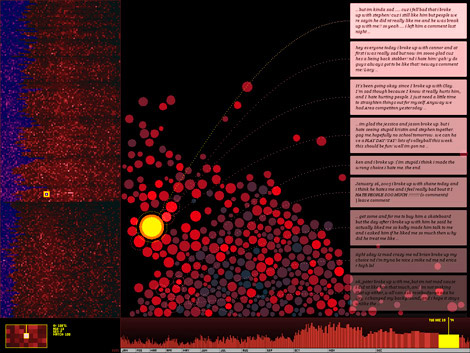 The article presents 13 new techniques of data visualization, with examples and further references.